Love songs, in general, are poetic, musical expressions of love. Many love songs are timeless and will be remembered across time. While it’d be impossible to name every hit song over the course of history, here is a list of 55 best love songs from the past decades which have remained as the best hits ever made.

Produced and released in 2008, ‘’Love Song’’ topped both the Adult Contemporary and Adult Pop Songs chart. Also, it was the No. 1 song of the year on those two lists.

This 1964 song hit the Hot 100 for four weeks and made the Supremes the first Motown act to produce two number 1’s. Moreover, their previous single, ‘’Where Did Our Love Go’’,  also was high in position.

Based on the most famous love story, ‘’Romeo and Juliet,’’ Swift wrote this song from her own experience. This is based around her family disapproving the guy she was dating.

This one is a classic that over the decades has featured in movies and TV soundtracks. In addition, it is an up-tempo record you will want to listen to time and again.

When it comes to love advice, this soundtrack by Otis Redding needs no introduction. It has long been considered a classic and was sampled for Kanye West and Jay-Z’s ‘’Otis. ‘’

Talking of all-time classic love hits, this record by Queen has beaten the test of time and is among the best soundtracks ever produced.

Originally by Keith Whitley,  Alison Krauss made it her own. A simple love ballad that captures the unspoken love shared between lovers, it carries a timeless message of love and devotion.

An emotionally resonant and simple song that brings out the ache from meeting someone who makes your world a completely different one.

‘’Total Eclipse of the Heart’’ is a glam rock ballad from the ‘80s that is considered a classic. Though it is slightly sad it is still a great love song.

This is the electro-pop ballad you couldn`t turn on your radio station without hearing. It is more of a heartache song, but certainly, remains to be a classic.

An eager rock ballad, ‘’I want to Know What Love Is’’ is a direct plea for love and affection. It is Foreigner’s biggest hit and also one of the finest love songs of all time.

Based on a sample from James Brown’s R&B hit, ‘’Papa Don’t Take No Mess,’’ this track was exactly how Jackson described, ‘’the bomb.’’

Celine Dion wrote this song about her boyfriend. After a slow start, it finally made it to the number one hit. Moreover, this record topped the Billboard for four consecutive weeks.

For the movie, ‘’The Woman in Red,’’ this soundtrack won the Academy Award for best Original Song. Additionally, it made the film an Oscar winner.

A collaboration between Carey and producer Dave Hall gave Carey her longest reigning number one hit.

This soundtrack was written by John Lennon and Paul McCartney on a tour bus in Yorkshire, England.

Mauriat did an instrumental cover of ‘’L’Amor EST Bleu.” It was once again at the top of the Hot 100. Furthermore, the song was voted fourth in the annual songfest.

The record was by Phil Spector who was inspired by a picture of his father’s tombstone. It had the inscription:  ‘’to know him was to love him.’’ It was also number one on the Hot 100 for three weeks.

Inspired by a long-distance relationship with his girlfriend, Jesse McCartney wrote the song together with Ryan Tedder.

Jackson explores the helplessness one feels at the hands of amazing love. This is among the very best soundtracks by the king of pop.

By listening to this song you will realize that the Beatles legacy of songwriting will never get old. This song perfectly expresses the simple pleasures of being in love.

This soundtrack is a bittersweet song that has earned its place as one of the best love songs of all times. Also, these music legends deliver a song that beats the test of time with an English rock vibe.

Another ‘80s classic, ‘’Time After Time,’’ is a sweet nostalgic pop song that also serves as a karaoke classic.

A perfect song for a loved one. It blends the romantic and physical aspects of love. This 90s hit should also be in every love playlist.

This heartache-fueled song by Sinead O’Conner will always hold a special place among the best love songs of all time.

This romantic ballad has been widely used in movies and TV for decades and people of all ages can sing along to it.

No other record will leave you daydreaming about love the way, ‘’ Just like Heaven ‘’ does. This is one of the best songs by The Cure.

Bryan Adams crafted the love song and used the art of parenthetical song titles that have long been lost.

This song is a blend of dance/R&B/hip-hop/pop. In addition to that, the chorus is memorable and very catchy.

This version of the song by Roberta Flack was beautiful, slower and more sensual. It made Flack a Grammy in 1973.

Furthermore, the changing dynamics of modern music have not altered the effect this electro-pop single brings. It has stood the test of time and remains timeless.

A lovely and lusty soundtrack ‘’Alive with the Glory of Love’’ is considered the greatest pop-punk song ever.

A favorite for all ages, this song is easily recognizable and a timeless song.

This song is also a classic. ‘’Unchained Melody’’ is a song written about loving someone who is far from you.

This track starts with a slow, seductive tempo. However, the BPM increases, creating a club atmosphere.

This version by UB40 might never have been released, as it was overlooked by producers for the soundtrack ‘’Honeymoon in Vegas.’’ However, it was later used in another film ‘’sliver’’ and became an instant hit.

Darren Hayes and bandmate Daniel Jones spent only 10 minutes on this song. However, they produced a hit that made it to number one on the Hot 100.

This masterpiece is one of the greatest love songs of all time. It is also possibly the longest one.

Carey wrote this debut single after signing for Columbia as a celebration of her life at the time.

Don Gibson wrote this song in 1958 but it took four years to produce. Charles finally heard it and decided to include it in his album ‘’Modern Sounds in Country and Western Music.’’

When Mario was working on this song he never knew it would be great.

This piano ballad by Sir Elton John made it to the Grammys Hall of Fame and will easily bring out that romantic mood in anyone.

A dance-pop song that carries some magic with it and never gets boring. Rihanna`s vocals were amazing. It also brings a certain glow to the dance floor.

‘’In Your Eyes’’ is a rock song that will always hit a romantic chord in your heart every time you listen to it.

A single with a lot of emotions, ‘’Your Hand in Mine’’ gives anyone who listens to it chills. Also, it is among the best love songs of this Century.

This version by Adele is beautifully devastating. Moreover, it is a song with an emotionally powerful message.

A song with an impressive tone of love and heartache, ‘’Thinking ‘Bout You’’ settles on your brain with a lovely warmth and you will want to hear it again.

A timeless classic love song, ‘’At Last’’ has beaten the test of time. This record captivates the room with just the first few notes.

This song is a sweet and wonderful up-tempo rock love song that is easy to sing along. In addition to that, it will remain a classic for a long time.

With this song, the group Earth, Wind, and Fire created one of the best songs of this century.

The emotional performance and the amazing vocal ability of Houston makes this song the greatest love song of all time.

This record was the longest running number one love song of the year at that time.

This soundtrack was the number one hit for three weeks in the Hot 100 back in 1977.

By Barry and Robin Gibb, the song become an instant hit and topped the Hot 100 for three weeks.

‘’Love Takes Time’’ was and is still among the finest songs by Carey. Moreover, it was a career maker for her and among the best love songs of all time.

Overall, love songs remain in our hearts forever. They move us, just as the feeling of being in love does. For this reason, it is important to look back at some of the greatest hits that have surfaced the music world.

Ruby holds a bachelor's degree in journalism and is an pet lover and adoring owner of two cats, Ruby’s love for music has led her to a successful career as a freelance writer specializing in musical instruments. When she's not writing she likes spending time with her spend and their 2 daughter Haley and Jennifer. 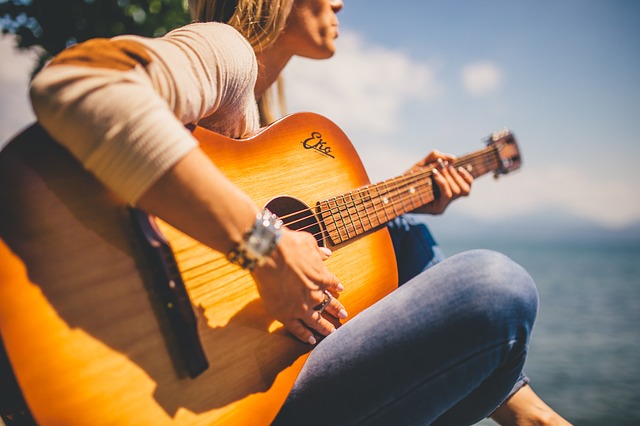